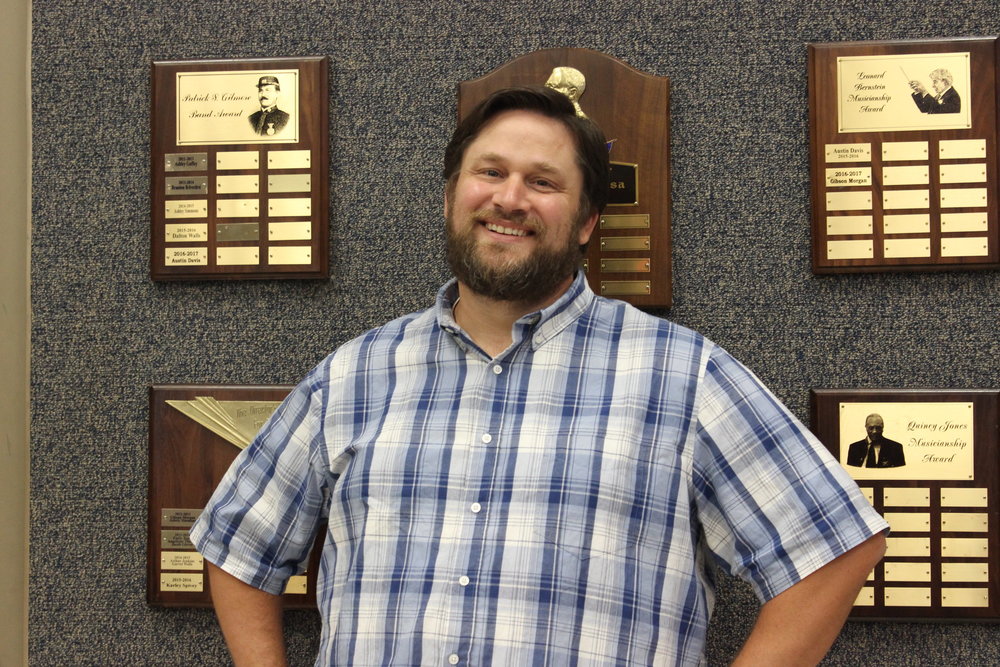 The Star City High School band is the beat to the heart here at Star City. The band does an amazing job at getting the crowds pumped to show pride in our small town school. The man behind it all is Brian York. Brian York or Mr.York as most people know him is the band director here at Star City. York attended many colleges including Mississippi Gulf Coast Junior College and  Florida State University. He graduated with a degree in Music Ed from the University of West Florida. He is currently enrolled at the American Band College of Sam Houston State University getting his Masters of Conducting.

Believe it or not York did not  always want to teach music; he started of majoring in music therapy. York began teaching in 1999 in choir and general music for a pep band for games. After a few years he directed at Pensacola Catholic High School, Pensacola High and Citrus High School in Inverness, Florida. He became the director here at Star City in 2014. York chose Star City because “ it was time to get out of Florida” he said,“It’s important for a teacher to experience how the education system works in other areas.”

York had many people that influenced him into the direction being a band director. “My middle school director, Russell Bertles, and  assistant high school band director, Robert Colon, were big influences for me. Also , a good friend of mine in the Pensacola Symphony was a band director, and he pushed me in this direction.”

York feels pretty good about his band this year. They have made a lot of changes in the program, including making marching band an after school portion of the program.He believes this change will open up the door for more students to be able to participate in the band class and the most important aspect of the program, which is Concert Band. York stated “ I think that the band is really going to grow over the next few years, and this year the Marching Band is looking and sounding great! I can’t wait to see how it looks at the end of the season.” York’s vision for the band this year is for the students to learn and to recognize the good, and not so good, sounds and have the ability to adjust. “ My vision for the band this year is the same as it is every year. Build and grow based off our experiences from the day before. Music is ever changing. You can listen to something one day and then listen to the same exact thing tomorrow, and it will sound completely different.”

York encourages students to take a interest in music. “ No time is better than the present. Find your passion and go for it. They can come and see me, or Mrs.Brewer if they are interested in a school performance ensemble. Or, they can just do some research and jump in. YouTube is a fantastic way to start to learn a new instrument, then just find someone to help them out.” The Star City High School Bands are growing with the help of Brian York! Watch out Star City, the band is ready are you?